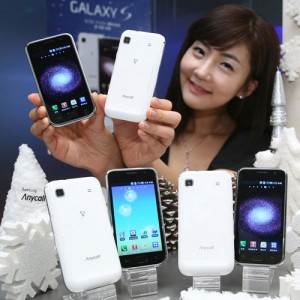 Samsung is poking their tongues out at Apple again.

It now looks highly unlikely that there will ever be a white iPhone 4.

The white Galaxy S can be pre-ordered from Carphone Warehouse for free on a £30 per month contract.

It will be running Android 2.1 but will be renewed to v2.2 thanks to an update later this month.

Other news from Samsung is that their Galaxy Tab is also getting a boost. The Tab’s 7-inch screen as been replaced by a flashy Super AMOLED number at the FPD International show in Japan.

So what’s so super about Super AMOLED? Well, as some of you will already know, the ‘Super’ version is capable of producing brighter colours, higher saturation and less reflectivity The resolution of the new screen will stay at 1024×600 pixels however.

With a new iPad expected next summer I can imagine that there’ll be other tablets/slates/pads upping their game in order to stay in the running.

There’s even whispers that the Super AMOLED version of the Tab could also appear in 5-inch and 10-inch versions!