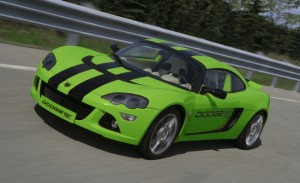 Our beloved UK Government is preparing to launch a new incentive to convince our petrol-loving island into buying electric cars.

What better way, in these times of the crunch, to coax folk to go leccy than to pay them to do it?

Transport secretary Geoff Hoon and business secretary Lord Mandelson are launching a major new initiative that will provide a Â£5,000 discount for anyone buying an electric car as part of a new Â£250m strategy aimed at cleaning up Britainâ€™s roads and to cut carbon emissions by a quarter by 2020.

Low-carbon emission vehicles are an obvious way of cutting those percentages down.

But these aren’t really a total solution – well, not yet.

We’ll actually require improvements in battery and recharging technology as most are only suitable for short journeys and take a long time to build up a full charge.

The price of the batteries are also too high at the mo but the Government sponsored Â£5,000 discount could help take the edge off.

This could also help with your purchase of… let’s say.. a Dodge Viper.

The as-yet-unnamed Dodge EV is based on that Lotus Europa which should be appearing in European showrooms next month.

The goal is 0 to 60 in less than 5 seconds and a top speed above 120 mph. “We’re still going to offer products that are visceral” quoted a source.

The ‘real’ Viper manages a 0-60 mph in 3.9 seconds and tops out at 202 mph in base-model trim but Dodge are aiming at the Tesla’s neighbourhood, and possibly for much less than the $100K the Roadster goes for.

“It’ll out-Tesla the Tesla,” says Aaron Bragman, an industry analyst with Global Insight, who predicts we’ll see the Dodge EV by the end of 2010. “It’s a new halo performance vehicle for Chrysler.”

Fortunately the Government also plans to offer Â£20m for cities to develop a suitable infrastructure for electric vehicles which will, thankfully, include charging stations and schemes for people to rent and try out electric vehicles.

Green may soon be also cool and quite quick! 🙂