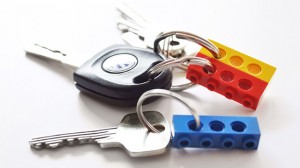 Do you have a selection of keys that are needed during the week, but not always at the same time? For instance, I’ve my house keys, a key card for work, and the keys to the studio – you might have car keys, etc to add to the mix. Now that I’ve seen this neat idea with LEGO, multiple key organising is going to be so much easier.

As well as the keys mentioned above, I also look after the spare keys for a couple of neighbours, that’s how nice I am, but I am not going to be carting them around all the time. Let’s face it, if you carried all the keys you have around with you at all times, you’re going to end up looking like some wannabe prison warden.

Taking keys on and off a chain usually involves that fingernail breaking, swear-inducing, prying apart of metal rings – but not if you have some LEGO near by.

Most of us will have access to some LEGO Technic (if not, why not?) – so we’re half-way there to having one of the simplest, and coolest, ways to organise your keys.

I don’t even have to go in to detail about how to make it. If you get stuck, just ask a kid how to do it.

Personally, I think that this is genius.

Not only is it cheap to do, it looks pretty hip, and it makes it safe and simple to get the keys you need. Thanks to LEGO’s colourful choices you already have some nifty colour-coding built in.

The other bonus is that it’s even easier to build a spot to hang your keys – see below.