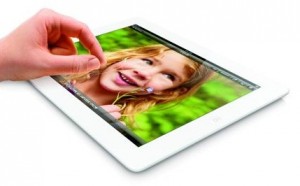 Here it is. The new, new New iPad – or the latest version of the iPad 4.

I reported the whispers on the web but now it’s official. There’s now a big-spaced iPad 4 on its way to the Apple Store.

Is this proof that Apple is listening to its customers or just another way of making fans of the fruity Cupertino brand part with more money – who knows?

The fourth generation iPad with Retina display which has just been announced has received a decent bump to the total amount of storage space – it has basically doubled from 64GB to hit the 128GB mark, making it an Ultrabook alternative if you choose to look at it that way. Heck, just buddy up a wireless keyboard and you’re away. Kind of. You’ll still be using a mobile operating system remember 😉

The 128GB version of the fourth generation iPad with Retina display will be made available for the iPad with Wi-Fi and iPad with Wi-Fi + Cellular models, and with double the storage capacity of its predecessor, this would mean you are able to stash away even more valuable content ranging from photos to documents, books, movies, TV shows, music and apps and the rest.

If you were looking for other new touches – well, that’s it.

The fourth gen iPad comes with a 9.7-inch Retina display powered by the Apple-designed A6X processor. There’s a FaceTime HD camera and iOS 6.1 is the operating system of choice.

Expect the new 128GB models of the fourth generation iPad to be made available before Valentine’s Day (start hinting now), starting on February 5, where it will come in black or white.