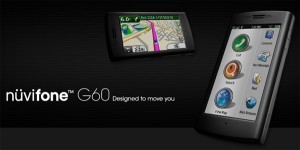 Garmin-Asus have just confirmed that their Android mobile will be making its debut by â€˜Q1 2010â€² – and there’s word that it could even arrive earlier than that!

The Garmin–Asus buddies have been keeping us guessing over its Android-based phone plans.

The Garmin-Asus G60 was originally rumoured to be running a varient of Android until the team confirmed that it was running on an in-house flavour of the Linux OS.

The latest Garmin-Asus anouncement switches the OS specs back to Android.  I’m dizzy!

The “chatnav” (or Chav?) phone will provide Garminâ€™s turn-by-turn navigation all wrapped up in a natty smartphone.

You lovely readers will already be aware that this handset has been delayed more than once and concern over developing a proprietary Linux OS might have caused development problems.

Personally I reckon that rockin Android will ease the way as well as spreading the love through the available apps and games.

Garmin-Asus rightly plan to use the phones location awareness with things such as geotaging any photos taken with the onboard camera.

Should we start taking bets whether this will happen?