GarageBand will be freemium app on iOS 7 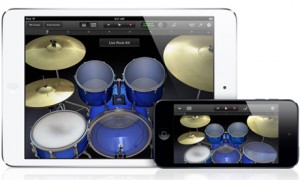 If paying for the music making GarageBand app was putting you off (I know from personal experience that musicians rarely have money to throw around) then rejoice and download it for free!

Where before you would have to balance whether to spend three quid on an app, fuel or beer you can now just weigh-up the latter two.

Apple has revealed that GarageBand will be joining iOS 7’s suite of free iLife and iWork apps.

MacRumors has uncovered an updated Built-in Apps page from Apple’s iPhone 5s website, which shows off the iLife and iWork apps’ new look for iOS 7.

It also notes that “GarageBand is free on the App Store for all iOS 7 compatible devices; additional GarageBand instruments and sounds are available with an in-app purchase.”

The other apps in the iLife and iWork suite will get upgrades alongside their shiny new icons; iMovie will feature a new “iMovie Theater” mode – which appears to be a simplified sharing system that lets you screen your creations on iPhone, iPad, iPod Touch, Mac and Apple TV.

Keynote will feature 30 template themes rather than the 12 found in the current app. iPhoto, iMovie, Pages, Numbers and Keynote will be available for free on all iOS 7 devices activated after 1 September.

Apple is expected to reveal the overhauled iLife and iWork apps at its event on 22 October as well as the new iPad 5, an iPad Mini 2, and the offical reveal of Mac OS X Mavericks. Also on the cards is the big outing of the cylindrical Mac Pro!