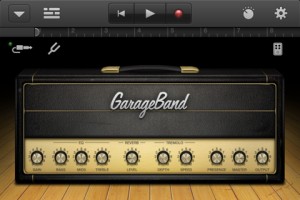 GarageBand – most of you will recognise the name of Apple’s point-and-click music creation software. First it was on their computers, then on the iPad and now it has finally slipped over to iOS 5 on your iPhone and iPod!

GarageBand is one of the offerings on Apple’s iLife home desktop suite and, even though it is pretty neat to mess around with at home or on your MacBook it got a whole new lease of life when it was ported over to the iPad – but just imagine writing a tune on your iPod Touch or iPhone. How good is that!?

If I, or anyone else packing an iOS 5 powered device, gets the urge to compose a quick tune on the commute then POW! Sorted.

Personally this is going to be a much better use of my time than me idly leafing through the morning’s Metro.

For those of you still unsure why GarageBand has become the default music idea station for many musos and tinkerers out there then read on.

Basically you choose your drums, guitar, keyboard – whatever you feel will add to the groove you’re aiming for, and then lay down the samples. If it’s not quite right, just use Flex Time to fix it.

Now, the iLife version could look a little daunting for the non-musically minded – or those that are more seasoned in the real-life instruments – but when GarageBand got squirted over to the iPad everything was made more approachable.

All of a sudden it didn’t matter whether or not you understood what to do to make a piano keyboard work – before you knew it you had control of a small orchestra of modern instruments. It is this version that has found its way to the iPhone.

Pick your guitar, keyboard, or drum kit and, after a few seconds of messing around, you’ll be making something akin to music. Let’s face it – it WILL be music, technically.

All the keys, drum pads and guitar strings are velocity sensitive too – this means the harder you hit the screen, the louder it sounds – which is pretty darned cool, unless you’re just trying to get an idea out of your head on to your phone in the middle of a meeting.

There’s a ‘standard’ version of all the instruments which means you only get to select from the eight most common chords in the key you’re playing in. If you’d rather get your jazz fusion chops on then you can get access to all of the notes – even if it means that your choice of a dominant seven augmented ninth may look more like the finger version of Twister.

OK, so there’s not a huge amount of choice in the app but you can still add vocals and external instruments to the mix which does mean that this could be very useful as well as being pure fun!

I’ve downloaded it straight away because for a measly £2.99 (it’s free if you’ve already d/loaded it for your iPad) it’s a great ‘note’ pad for getting ideas down as they generally happen when walking around, when you’re sat on the loo or on the ride home and I for one don’t always take my bass to those places.