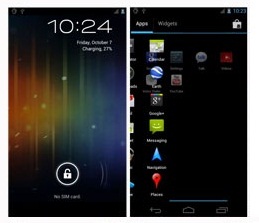 You have probably heard that Google and Samsung  have axed tomorrow’s unveiling of Google’s latest Android operating system, Ice Cream Sandwich as well as the Galaxy Nexus. That hasn’t stopped some rather tasty screenshots being leaked to the interwebs though!

Samsung and Google postponed their Mobile Unpacked 2011 Google Episode conference issuing a joint statement that read: “It is just not the right time to announce a new product.” This could well be out of respect for the passing of Apple maestro, Steve Jobs.

Even though everyone is awaiting the new date and time for the release it seems that Ice Cream Sandwich couldn’t wait to meet everyone. Just check out these lovely pictures of Android 4.0 (more below) – rather nice isn’t it? The basics follow the familiar Android layout but the graphics look totally sweet.

The ‘About Phone’ screen shows that these shots are indeed v4.0, or Ice Cream Sandwich to its friends, and I’m digging the user interface’s new clothes. The bolder icons and colour-scheme makes the UI seem more purposeful and a little less, well, childlike.

Android Ice Cream Sandwich is supposed to merge the best of Honeycomb and Gingerbread – this will be pretty awesome but these screenshots aren’t really revealing anything to get giddy about.

What can be certain is that these new graphics are going to pop on the Samsung Galaxy Nexus’ 4.65-inch Super AMOLED screen. Shades may be required folks!

As well as that potent 720p screen the Galaxy Nexus will pack an 8-megapixel camera that can record in 1080p HD as well as other niceties – take a look at the leaked specs here.