Gadgets are the New Black in London Dahling 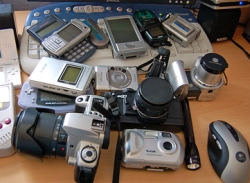 Following on from the news that Brits spend around 50 grand on gadgets and electronic gear in an average lifetime it seems that the hunger for geekahol and gizmos is still strong through the Credit Crunch!

London shoppers are still finding the cashÂ to spend on shiny new gadgets whether as a useful tool or just to look right en vougue!

Five hundred shoppers on Oxford St were recently surveyed and asked what electronics they had on them at that time. The results found that the average person steps out of the house with Â£247 worth of gadgets in their pockets and handbags – I can hear all the bag-snatchers rubbing their hands together right now.

Sitting on public transport I can generally see another half-dozen iPhones being tilted or flicked through and perhaps 2 or 3 PSP’s during an average journey – add that to London being the best in the world for wifiÂ it all makes sense.

The survey was commissioned by Insuregadgets.com, who have said that the survey results show that consumer technology has gone mainstream.

So; how many gadgets to you wander around with on your person?Â  Personally I’m usually carrying my iPhone and a set of Porta Pro’s.