Gadgety UK fans will no doubt be familiar with Channel 5’s Gadget Show – the weekly round-up of tech hosted by Jason Bradbury, Suzi Perry, Jon Bentley, Ortis Deley and Pollyanna Woodward. Well, once a year they take over the NEC, Birmingham to create the largest consumer electronics show in the country.

This year I have made a concerted effort not to return from Gadget Show Live with a hernia inducing amount of pens, brochures, balloons and other such detritus which will, no doubt, live on and around my desk until I see fit to give it away or bin it.

I am proud to report that I have managed to come away with a dozen or so business cards, a tote bag (which will be used) and 3 brochures.

Sure, this means that I will have to research and contact more people but at least my bag does not weigh the same as a small country and I feel good in the fact that I have not contributed to the decimation of a forest somewhere.

So, what about the show? The Gadget Show Live stands proud as the largest UK event of its kind; so it is a must for any gadgety groupie.

On arrival I was a tad concerned by the amount of supposed tech fans getting confused by the self-service badge stations. All you have to do is scan the barcode and/or QR code on the email you received and then the printer squirts out your pass card. Slip that into the plastic wallet provided and then use the attached safety pin to display it somewhere appropriate upon your person. Job done. Be warned – there are a number of stands that will have workers on them who will scan your barcode in order to put your details in to a prize-draw without you having to fill anything in. Yup, drive-by scanning is the future at GSL!

This year I limited myself to 3 hours – this stops me from taking too many breaks and buying more coffee as well as forcing me to focus on checking out the stands and not sitting in a Formula 1 simulator for 15 minutes.

The Stands at Gadget Show Live

Both Samsung and LG were showing off their latest televisions – incredibly thin, large and bright with equally impressive price tags.

The Sammy stand had the Samsung ES8000 which is one of the pioneers of using gesture and voice control technology. Soon, when you shout at the telly, you’ll be controlling its functions instead of just venting. Is this the future? Well, not for a while in my home when you’re looking at £2,000 or there abouts!

The Carphone Warehouse were there hawking their phone and tablet peripherals, or App-cessories as they call them, such as the Atari Arcade and the Apptoyz App Blaster (the same company who brought you the iPhone-controlled cars) as well as Crayola’s colouring app complete with oversized crayon stylus.

Fatman had a new product on their stand which has only been out for two months – the Mi Tube.

The Mi Tube is a Bluetooth connected version of their popular range of valve-powered amps. Being Bluetooth there is no dock. The sound was pretty good (it was fighting against the surrounding hubbub after all) and it kicks out 28w per channel. There was some loss of signal when the guy on the stand went to fetch me his card but that could be down to the amount of interference in the place.

It had a pair of line inputs round back and was fairly compact measuring 183mm in diameter and standing 145mm tall.

I had a play around with another Bluetooth speaker the Yorkshire designed Damson Cisor BT5 resonating speaker.

The BT5 is not released until tomorrow (April 11th) and is a 5w speaker. This took a couple of attempts to pair my iPhone and once I was pumping some Mr Big, En Vogue and Ministry through it I was ambivalent to its performance to be frank. True, it’s compact but it was lacking the power to compete with the background noise – I will chase Damson up to see if I can test one at home though as I am willing to give it the benefit of the doubt being a Yorkshire lad.

The idea is that the music is transferred and amplified through whatever surface it is sat on. So, perhaps, the surfaces on the Gadget Show Live stand weren’t acoustic enough?

Budget media player company Sumvision have a range of products that help you take your movies and music everywhere and play them on any telly. The Nano1 was the one that caught my eye as it is powered by Google Android 2.3 and so you can access any app from Google Play store – eBay in between films on a big TV? Yes please 🙂

Touted as the smallest Android media hub on the market it packs an SD card reader and USB inputs and will sling your HD flicks to your bit telly for well under £80.

The Cyclone Nano1 has full support for all HD 1080p video playback, photos and music.

I had a good ol’ mess with the IK Multimedia iRig tools, although they seem to favour digital musicians, DJs and Guitarists – bassists get a single Ampeg amp to play through and a few cabs at least. 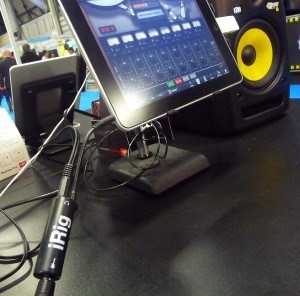 I have to admit that the guitar amp and pedal sounds are pretty good – even with my basic strumming on a Dan Electro guitar.

The full app costs £5.99 and the additional 8 track tape-to-tape looking recorder would be a must. The iRig was at a show special price but you can find it for £25 on Amazon

Not being a guitarist I was a little self-conscious as the guy had the speakers cranked up and my attempt at bluesy licks were attracting people’s attention – I did not like this too much. It was an impressive tool (iRig not me – I just felt a bit of a tool) and one I could see me using with my bass. This will be another thing I will be following up on no doubt.

I had a quick chat with Neil at the Parrot AR Drone area. This iPhone/iPad controlled flying machine was performing tricks and, thankfully, should you not send it instructions it will just safely hover until you grab the controls once again. This would definitely appear on my Christmas list should it become cheaper.

If you like tech and gadgets I would recommend you check out Gadget Show Live – there’s so much more than I’ve mentioned here. There’s the Gaming Zone, the Super Theatre (this sells out very fast), Music Zone, Photo Zone, Home Gadgets – just check out the floorplan here 🙂

Let me know what you find there if you go.