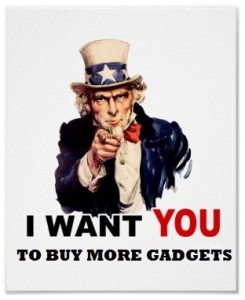 Most of us here are used to being constantly connected to our emails, social networks, being able to check a highly detailed map of our area and how to get to the next place, and so on. When you look at what mind-bending graphics were possible in 1963 compared with what we expect now – why do we still lust over the next big thing when our ‘old’ thing has only been around for a year?

It is true that, on occassion, we might check out each others gear and quickly sum up how in or out of step that person is with what’s both hot and cool in the gadgety world. But, if their mobile still works and does everything they need it to – why should they upgrade?

As a tech journalist I have the perfect excuse as to why I *must* have that tablet or that phone – but, no matter how much I want it, do I need it?

The answer, of course, is generally: no.

I am yet to be convinced to buy a tablet whether it be an iPad, Surface of Nexus 7 and I upgrade my iPhone every other model. This means I’ve had the 3G and the 4 and am patiently awaiting the new iPhone 5. I am lucky that my phone upgrades land on the models which are usually host to the major changes to the iPhone – there is a part of me that wonders, however, would I buy myself out of a contract so that I fell on the major hardware upgrade years. I think, maybe, I might.

Where this spells bad news for my bank account to the point of me thinking I might need debt management, it’s surely good news for Apple, Microsoft, Google, Samsung, et al.

They have successfully turned something geeky in to something fashionable and ‘street’ and reports have already stated that, even in times of recession, we will find a way to buy the latest tech.

Back when I was pestering my parents to upgrade the Vic 20 to a Spectrum +2 it wasn’t because that’s what my friends had, or to be ‘cool’ – it’s because the Sinclair was faster, had better graphics, a larger memory and had better games.

When me and my brother moved over to PC it opened a whole new world of geek. We weren’t swayed by PlayStations (we did have a MegaDrive at some point), Xboxes or the like. We could build our machine to whatever spec we could afford and that was exciting.

Moores Law always helps but I’ve generally said that if you’re looking for a whole new system and want something to last a few years – I’d budget for £1,500. That rule of thumb has lasted me for many years. The last time I spent that was for a gaming laptop and that lasted four years of near constant use.

True, Chris has since been bitten by the Mac bug and can be seen with iPhone, iMac, iPad, MacBook and now MacBook Air but, as an internet-based professional, he has an excuse. Kinda.

You’ve probably seen those people that refuse to turn off their phone on a flight. Scarily 30% of passengers have convinced themselves that the need to power off devices when flying is a myth because they’d hate to miss that email/Tweet/SMS – remember when we only had landlines and payphones, people?

TNS provided reseach on behalf of Intel which indicates that 44% of U.S. travelers feel anxious about leaving home without their mobile computing devices and more than three-quarters said losing a device on the road is more stressful than losing a wedding ring.

Is this how humans are evolving – or is this how the big businesses want us to become reliant on tech and push the need for constant upgrades?

I spend a lot of time at my computer, which I built myself. Yes, I know there’s more powerful and more sexy machines out there but this thing of mine does the job.

If you want a gadgety giggle: I’m running Windows 7 64-bit on an Intel Core 2 Duo CPU @ 2.66GHz with 6GB RAM. I have 1TB storage and a 23″ 1080p full HD monitor. I know that this kit wont set many people’s pants alight but, for bashing out these words and the occassional zombie killing spree – it does the trick.

But then the Apple World Wide Developer Conferences hit and, the thing is, it’s hard not to get swept up in the frenzy of an Apple WWDC.

In fact, there’s almost a ritual to the whole thing. Weeks and sometimes months before the Keynote speech there’s the rumors – and plenty of them.

On the morning of the keynote address, geeks everywhere eagerly refresh browser pages containing live updates, generally squeeling with hightened senses of pleasure all over Twitter and Facebook.

Then it happens – the new MacBook, iPad or iPhone is announced and then there’s more gadgety-based outpourings of lust splattered all over Twitter.

The only thing to do after all of that is to go over and preorder that next hit of geekahol.

How can a geek survive without killing their bank account and melting their card?

The best thing a gadget addict can do to prevent succumbing to temptation is to limit exposure to their weaknesses.

I’m of course not saying “you must not buy the lastest gadgets” – that would be insane! I’m just saying that it is too easy to get caught up in gadget envy. The same happens with audiophiles, petrol heads and even chess players. The same principles listed above will work no matter what it is you covet.

You’ve tried for ages to resist the urge to buy – but having that slab of shiny is now the only thing you think of, so what now?

Well, chances are you have been very clever and rationalised why you have to have that new spanky tablet – you’ll be able to learn new languages on the go, watch films, read all those classics you said you would, etc.

You and I both know that that is totally bunkum but hey, it shows you’ve thought about it 😉

If you are going to buy that tablet so you look cool, hip and trendy…. I mean, so that you can read Hard Times and learn Cantonese then you should:

Don’t be in such a rush that you buy on credit. Going into debt to purchase tech is a bit daft as the new thing will be around the corner.  It is scarily easy to want/need and buy that new TV or computer because it has all the bells and whistles when you still owe loads on the old (less than 18 months) unit which you convinced your other half was the dog’s danglers when you bought it.

Waiting makes the purchase even better.

I wanted a Volkswagen Karmann Ghia for ages. I did my research and discovered that all the European models in my price range would be rusty in all the wrong places. I had a choice – get one now and risk it or I could wait, save a little longer and then test my options. I waited and contiued to save for no more than another 8/10 months and then ordered one to be imported from California. It arrived, and I had over 10 years of trouble-free motoring with that 1971 piece or aircooled lovliness.

If you really want to buy a new gadget, be methodical. Save your money. Wait until the purchase makes sense. There’s nothing wrong with upgrading to new technology when you need the new features and you’re able to pay in cash. As a small wooden chap once said “that’s the way to do it!”

If you can’t wait to save for the latest and greatest in tech right now, you could either continually max out your credit card(s) or, as some people I know do: sell your 6 month old tech to fund your next hit and call it recycling.