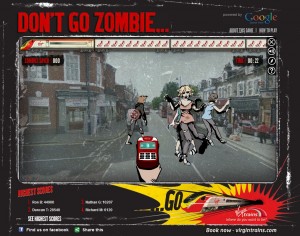 Whoa there kinky gutter brain! It’s not what you’re thinking!

Virgin Trainsâ€™ Google Street View game is fairly basic but quite addictive and you even get to use your Facebook profile picture to create a Zombie!

I’m digging the fact that as it’s using Google Street View you can track down zombies in your own neighbourhood or around your favourite hang-out. I’ve been tracking down the undead around E17 as I live in Walthamstow and probably already know most of them 😉

You basically save zombies by using your ticket gun – you can even apply your group saver.

If you’re a top zombie hunter you’ll be entered into a draw to win first class travel with Virgin Trains. The game was created to support their â€œDonâ€™t go Zombie, go Virgin Trains campaignâ€.

If you are caught by a zombie your Facebook profile picture can be zombified and launched into the game – you can then see how much your friends care by posting a â€˜rescue meâ€™ message on their wall.

Later this summer there will be some special guest Zombies including Sir Richard Branson, who you will be able to kill or rescue (depending on your preference).

Have a go – it’s better than working 😉