Full on Tablet War – iPad 2 and BlackBerry PlayBook Launching Together 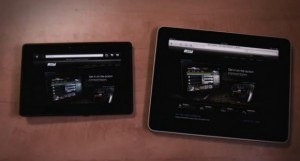 As the headline points out it sounds like the Apple iPad 2 will be launched at the same time as RIM’s rival – the BlackBerry PlayBook.

This is all according to a report in Chinaâ€™s Economic Daily News. Word is that both tablets will appear within days of each other in April or May. The mystery source also reckons that this will potentially harm the sales of one or both slates.

The tablet whisperers, who apparently have a reliable track record, also state that iPad 2 will pack front and rear facing cameras to bring it inline with Appleâ€™s cross-product FaceTime capabilities. No huge gamble there methinks 😉

I think that it’s also a safe bet that the new iPad will come equipped with Retina Display as well as a much needed USB port.

Could the Apple iPad 2 continue to gobble up the tablet market share as the original iPad has or is competition becoming more, well, competitive?

Just to add fuel to the fire – check out the RIM vid below showing the current iPad go up against the PlayBook:

What do you want from the upcoming tablets?