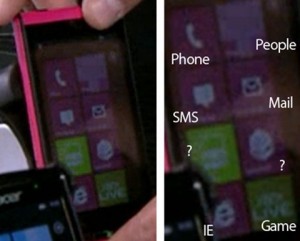 Are you itching to get your grubby little paws on the first Windows Phone Mango handset? Here’s what seems to be that very beast.

The Fujitsu IS12T looks ready to make its debut in August – that’s a whole month ahead of Microsoft’s much talked about launch of the new Mango-flavoured mobile operating system.

The funky Fuji is set to be released on the KDDI network which, if you haven’t already worked out, means this is likely to be a Japan-only phone.

The Fujitsu IS12T will be equipped with a 3.7-inch LCD screen as well as the latest Windows Phone 7 OS.

The thing is – Nokia was supposed to be given first dibs on the Mango Release which is expected to happen in October.

Is Fujitsu being naughty and jumping the gun?