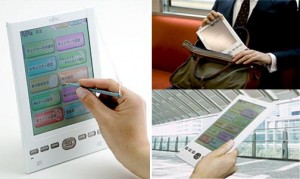 The UK is still waiting for Amazon’s latest eBook readerÂ but it may already be redundant (if this baby comes over).

The Fujitsu FLEPia is Japan only and isn’t actually planned to be released in the UK – at the moment.

If it is released globally I can imagine a few worried faces in Amazon as the FLEPia is thinner but also rocks a colour screen!

The actual specs of the thing is an 8 inch 1024×768 XGA touchscreen that can display 260K colours – this should bring a new dimension to an uploaded comic or graphic novel shouldn’t it?

Having a colour display also wont hurt when web browsing 🙂

The other bits n bobsÂ include Bluetooth and Wi-Fi, an SD slot capable of holding 4GB of data, file compatibility that covers everything from Words docs to images and, perhapsÂ most importantly -Â  up to 40 hours of continuous use according to Fujitsu.

The FLEPia is available to pre-order in Japan right now for the equivalent of Â£720.

That could be a stumbling block over here.

Amazon, you’d better get that Kindle 2 to us before Fujitsu drop the price and drop the FLEPia here 😉