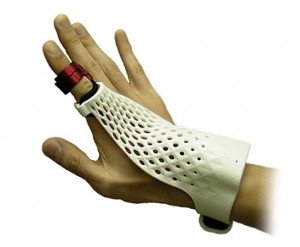 Fujitsu has unveiled a new glove-based controller which it hopes to bring to market soon. This could be the perfect accessory for the growing number of wearable tech being launched.

Fujitsu Laboratories has been developing the new gesture control glove and equipped it with Near Field Communication (NFC) technology and a gesture-based input control interface.

All this cleverness hands (sorry) the glove the ability to control other devices when a touchscreen or other control interface is perhaps not an option.

This futuristic handwear is equipped with a ring-like attachment on the finger which contains an NFC reader and contact-detection sensor, with the body of the glove itself packing a gyroscopic sensor and accelerometer.

Initially, Fujitsu imagines the device being used in industrial environments: objects can be tagged using NFC stickers, and then marked by the reader located on the user’s finger. Gesture-based control could be used to report issues with an item, log jobs or to acknowledge a work-related order.

“Smartphones, tablets, and other smart devices have made work more efficient by digitising the process of activity-logging, and attempts have been made to use them to support work outside of office environments,” says Fujitsu, going on to add “But in some work settings, such as those that require gloves to be worn or environments in which hands get dirty, taking out and using a conventional smart device can be difficult. Another hurdle is that users need to stop what they are doing in order to use their smart device.”

The company claims its relatively bare-bones system can recognise six patterns – up, down, left, right, rotate left and rotate right – with 98% accuracy, using the relatively unnatural dorsiflex position of the arm to distinguish between normal arm movements and those directed at the glove’s recognition system.

It also defines gestures based on the shoulder as the center of a coordinate system. This accommodates variations between individuals and allows gesture-based inputs in a variety of positions without awkwardness.