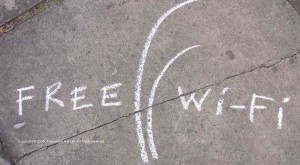 Genuine free Wi-Fi is thin on the ground…. errr….. air.

Those places that do offer ‘free wi-fi’ will stand over you until you buy a coffee, beer or bun.

That could be about to change with the introduction of Freerunner.

Freerunner has been thought-up by Owen Geddes, one of the people responsible for The Cloud network.

No need for a subscription as Freerunner is a solution for the UK, offering free to use access points in venues geared towards the community.

Freerunner is also offering its Wi-Fi solution to commercial venues too for a charge – but a charge that’s just a third of the current rate set by other operators.

That means you can stop after that sixth extra-large-double-whip-caramel-macchiato.

‘Back in 2002, free, open access points were popping up all over the place and there was a real buzz about the potential of public Wi-Fi,’ says Owen Geddes, CEO of Freerunner. ‘Since then, networks have been locked down and access for a day can cost more than your home broadband costs in a month. Our vision is to give consumers free public Wi-Fi access whether they are in the the centre of London, the community centre at the end of their road or the local cafÃ© in Hartlepool.’

The Freerunner network is based on Open Source technology, with distributed network architecture, no data centres and no single point of failure, which should mean reliability, a faster connection and a low operating cost.

The north east of the country will be the first to get in on the action.

If Freerunner takes off, which it really should, expect to see it down your street very soon.