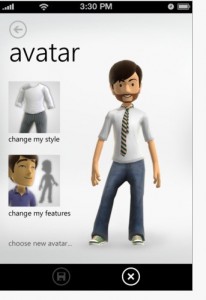 Owners of Windows Phone 7 handsets have been used to having links to their Xbox accounts – now those with the Apple made phones can get in on the action – thanks to the free My Xbox Live iPhone, iPad and iPod touch app.

My Xbox Live gives you the power to check out your achievements, dress up your Xbox Live avatar and send messages to your Xbox friends all from your iOS device.

You can also compare your awesome achievements with other Xbox Live gamers as well as send friend out invites.

The new app was released alongside the new Xbox Live dashboard and may confuse the Apple faithful as it looks exactly like a Windows Phone app – including it sporting a Metro-style tiled interface and on-screen icons along the bottom.

There is a part of me that thinks the Metro interface on this app could be a subliminal way to get iOS users to think “Hey, this Windows stuff is actually pretty neat on a phone – I might buy a Lumina 800 next” – Which, if true, is a very sneaky but clever way to go about things.

Needless to say that this My Xbox Live app isn’t as comprehensive as the Windows Phone Xbox Companion app – that would just be daft wouldn’t it? For a start, the iPhone app wont let you control movie and music playback on your Xbox.

If I worked for a certain Cupertino-based tech company I’d be taking this app as another gauntlet slapped across my face after the release of the very slick Nokia Lumia 800 and cheaper 710 with pics appearing of the Lumia 900.

The app is free and out now. It requires iOS version 4.3 or later.