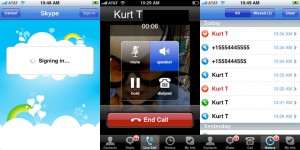 The much anticapted (probably not by O2) release of Skype is almost here!

Skype’s official iPhone client will show its free callingÂ green ‘n’ white face in the Apple App Store tomorrow (Tuesday March 31st) with BlackBerry owners, getting it in May apparently.

You can snap a pic for your profile from within the app and those folks with 2G iPod Touches with external mics are also invited to the party.

What I was hoping for has, alas, not happened.

Voice over IPÂ via 3G isn’t gonna happen in tomorrow’s version unless you’re connected to a wireless network, and then text messaging has been entirely ignored.

You wont even be able to top up your SkypeOut account or buy other services like voicemail – but then you can’t access them from the app anyhow.

Skype told CNET that their app will have better voice quality (and probably lower latency) than other clients – but when put up against those other clients such as Fring I’m not seeing a heap of benefits here other than I’m already on Skype on my lappy.

What are your feelings?

Information via CNET and NYT with the pics coming from CNET