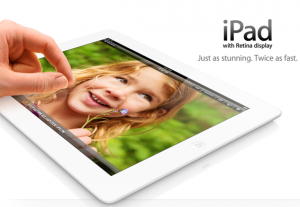 If you bought an iPad 3 recently, you are no doubt more than a little miffed at Apple’s news yesterday that they are replacing it with a faster, more efficient model – at the same price. Well, you might be able to get a free upgrade.

The third-gen iPad arrived in March, and this should have kept Apple tablet owners happy for the next 12 months or so – but the Cupertino giant decided to release a newer iPad with significant upgrades, including 4G connectivity compatible with the UK’s EE network, on an iteration released just over six months ago.

Offering some solace to those who’ve very recently bought themselves an iPad 3, it looks as though Apple could offer a free upgrade to anybody whose device is 30 days old or less.

At this point in time, it’s not confirmed all stores are participating, but some customers have been contacting their local stores, and reports are getting back to me that some shops will let owners of the third-generation iPad swap their device for the fourth-generation iPad – provided it has been bought within the last 30 days.

While the 30-day policy may be good news for some who’ve only just got themselves an iPad, it doesn’t really offer any consolation to those who grabbed theirs when the ‘new’ iPad was released – or even just two months ago.

Surely, releasing their new iPad Mini was good enough? Did they have to release a newer iPad?

Were you one of those that queued up and waited patiently in line in all weathers to get your iPad 3? How do you feel? Are you still happy with it or would you rather have the iPad 4?