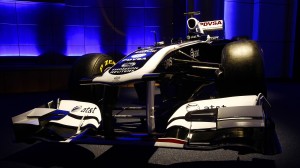 Formula One has given us drivers many things – Traction control, flappy paddle gearboxes, anti-lock breaks and weekend trips to Halfords so wannabe racers can bolt on wings and skirts in the hope to increase downforce and reduce drag on their Corsa.

For the first time though the humble school-run transport is sending something up the food chain.

Fans of the sport may already be aware that the high tech F1 cars already utilise petrol/electric hybrid-style KERS (Kinetic Energy Recovery Systems) which is designed to provide an extra 80hp of boost for a maximum of 6.67 seconds per lap (yup – the rules are THAT precise) to aid overtaking.

The 2013 system is planned to be used so that the new F1 cars will be able to run purely on electric power when they are driven through the pit lane – just like how the current batch of hybrid road cars switch to battery power when in city/town mode.

Williams F1 Chairman, Adam Parr, explains how this would work:

“It will have one fan generating electricity to super-charge the engine, another fan to recover energy from the exhausts which will recharge a battery and then be usable,”

As with any step forward there will always be people unconvinced by the move – the main hurdles to the new greener engines happen to be Bernie Eccleston, President and CEO of Formula One Management and Formula One Administration and part-owner of Alpha Prema, and Ferrari chief Luca di Montezemolo. Both reckon losing the famous high-pitched roar of the F1 car engines would take something away from the Formula One experience.

Parr makes the point: â€œFormula One is ultimately defined by its technology and Formula Oneâ€™s constant reinvention of itself, whether itâ€™s on the chassis side or the engine side, is fundamental to the nature of the sport.â€ Before going on to say “You’ve got cutting edge technology….. I mean really the future of road cars, you’re going to have a very powerful message about environmental performance and what technology can do. And the racing will be just as exciting, if not more… You are going to have a powertrain generating well over 800hp from four cylinders. It’s going to sound fantastic.”

Do you think that having hybrid F1 cars would help make the road cars more appealing? I think that the technology that the Formula One cars would develop could make the more powerful, high performance vehicles and be able to return to how things should be – with tech being passed down from F1 to the cars on the street.

How about you? What do you reckon?