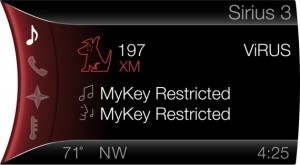 If you’re a parent loaning your car to one of your precious offspring there was a time that “of course I’ll be careful with the car Dad” had to be enough.

Ford is not so trusting and, since the introduction of the programmable speed and volume capping MyKey in the 2010 Focus, has been controlling the little car-jackers.

Now Ford is adding the option to block 16 Sirius radio channels from the car’s dial – the list includes the likes of Howard Stern, Playboy, and Hip-Hop Nation. Hmmm…….. I NEVER listened to the radio in my Dad’s car – that’s what tapes/CDs/MP3 inputs [delete as appropriate to your age] are for!

Parents also get to set top speeds between 65 and 80mph, instead of the previous fixed cap of 80mph. Other annoyances… err… safety features have been carried over from the original such as a chime that sounds at 10mph intervals, starting at 45mph, and an advanced notice when fuel levels are low.

The new features will come standard issue on the 2011 Ford Taurus and Ford Explorer, and will eventually reach across both the Ford and Lincoln brands.

So – if you want to look cool in your ride – buy your own ride!