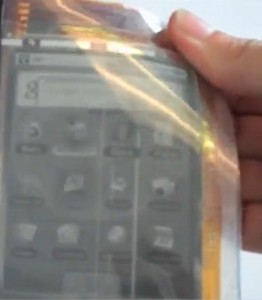 iPhone 4 – the thinnest smartphone… yerright Steve! How about a super skinny smartphone that’s about as thick as a piece of paper?

A group of Canadian-based clever-clogs have gone and developed a phone that could be slipped under a door, will not ruin the line of your clothes or shatter if dropped.

The PaperPhone, as it has been named, will be officially unveiled later this month by researchers from Arizona State University, Queenâ€™s University, and Amazon Kindle 2 creators E Ink Corporation.

The flexi phone can pretty much match whatever smartphone you happen to own – you can read e-books, play music, make calls, although I didn’t notice a camera 😉 Heheheh!

Where everyone is making pinch to zoom and swiping through menus ultra smooth the PaperPhone takes things to the next level.

Roel Vertegaal, Director of Queen’s University, proudly proclaimed in the Vancouver Sun â€œThis is the future. Everything is going to look and feel like this within five years,â€ he went on to state â€œThis computer looks, feels and operates like a small sheet of interactive paper. You interact with it by bending it into a cell phone, flipping the corner to turn pages, or writing on it with a pen.â€

I am sure that there would be a lot of people welcoming a more physical way of interacting with their choice of tech – let’s face it, BlackBerry have kept the QWERTY-boards on their latest releases. It would also be handy (arf!) for people who perhaps lack dexterity or coordination for whatever reason.

The PaperPhone will be unveiled officially on May 10 at the Association of Computing Machineryâ€™s CHI 2011 (Computer Human Interaction) conference in Vancouver.

Check out the PaperPhone being used below: