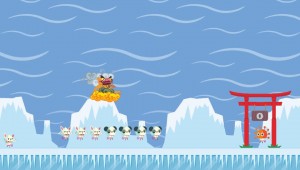 Floating Cloud God Saves The Pilgrims In HD is an interesting title for Dakka Dakko’s new Vita release. Their last game, the creatively named The HD Adventures of Rotating Octopus Character proved a real challenge – is it much of the same again?


Some games really give you a taste of what to expect in their cleverly worded titles. Well not here. Ok you do play as God and need to save your followers, but this game is not what you would expect (unless you had played the PSP mini version last year that is).

They do say ‘what you ask for in prayer, believe and it shall be yours’ , the closest I got to religion was being sneezed on by a priest, so I hope this does not spoil my time on Floating Cloud God Saves The Pilgrims.

Floating Cloud God.. is actually a side scrolling shoot ‘em up under a clever disguise. You play as the most powerful force in the universe, upon a floating cloud.

Your aim is to protect your pilgrims, get them unharmed through 3 stages and then to the end of level bosses. Stopping your pilgrims from scrolling along the screen are bouncing sun umbrellas, flying eyes, dive bombing crows and other such random enemies. Your band of followers on the ground need strength and faith to guide them through life, of which only you can provide. In return they give you love and lots of it, so much so that this love increases your fire power. Lovely. Also increased hearts means longer range fire power which is a help in later levels as more wired and wonderful creatures appear. 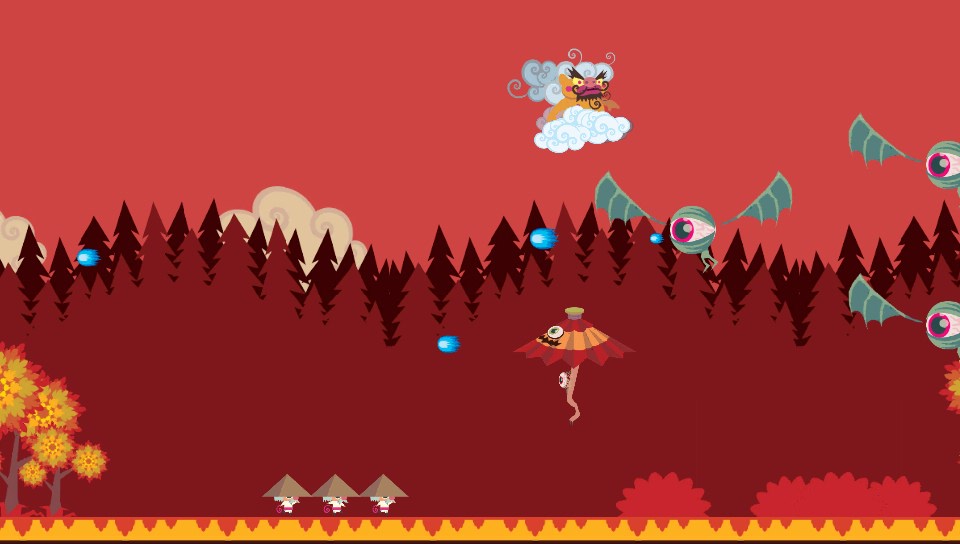 These bad guys also fire at your flock but being God, you can’t die, so taking one for the team is fine. Early levels are easy and with the option of re starting levels there are never any frustrating moments. The game never gets overly hard either, so a pleasant gaming time can be had, but a short one. There are no scoring points, no leaderboards and no online play. It’s simple and fun and like a retro shooter should be.

Each of the seven beautifully drawn worlds create a crazy and weird back drop to this shooter which does set this apart from other games in the genre.  The Vita twin-stick controls also make for a super smooth ride and the right trigger offers a flurry of bombs at your disposal.  Walking on water? Yes this really is one of the less challenging 100% games to boost your percentage. Well with the almighty at the console things should be. 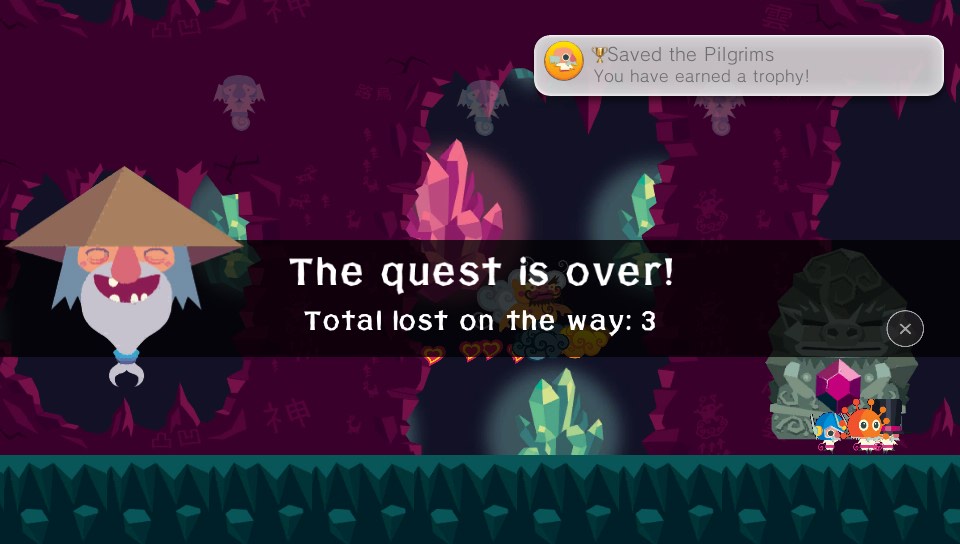 With seven levels in total and a trophy for completing each end boss (without losing a pilgrim), this is a fun cute take on the side scrolling shoot’em up genre. The trophies up for grabs are 9 Bronze

Dakko Dakko have given us a short clean colourful burst of gaming fun with no added grind. Keep back your Sunday School collection coins, Floating Cloud God is money well spent.