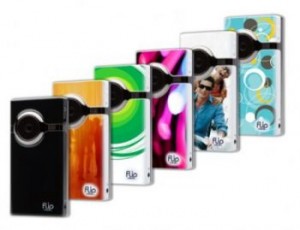 Cisco bought out Pure Digital in a multi-million dollar deal earlier this year and they intend to use their networking know-how to launch a new Wi-Fi-enabled Flip digital camcorder.

Those lovelies over at Pocket-Lint had a chat with a Cisco spokesperson who said that the new range would feature “a large screen that slides to reveal the record and menu buttons underneath” allowing users to see what is going on when they are recording video.


Cisco wants to keep this in the pocket-friendly region in cost as well as size so don’t go dreaming about touchscreens and the like!

The plan is that you’ll be able to record video and upload it straight from the camcorder over Wi-Fi networks both private and public, a feature currently being offered in some DSLRs.