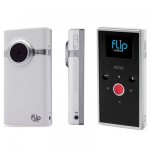 I, and no doubt your goodselves, have probably read about the Flip Mino a while ago but it wasn’t official in theÂ UK, until today!

The Flip Mino is the younger sibling to the Flip Ultra and gives you 2GB of on-board flash memory allowing you to capture up to 60 minutes of video with sound and has a 1.5-inch colour LCD screen around the back. It weighs only 90g so is easily pocketable.

The Flip Mino rocks a rechargeable lithium-ion battery that powers up automatically while plugged into a computer and provides more than 4 hours of recording time on a single charge.

My fave feature has to be thatÂ built-in software.

It kicks into action as soon as you flip out that hidden USB plug andÂ shove itÂ into a computer, letting you offload clips, edit footage and upload them to YouTube or MySpace in just a couple of clicks.

It’s costing Â£120 at the moment but there’s some stiff competition on the way from Kodak so there may be a price drop soon!Â  😉

The ultra is priced at Â£99 – Run over to the wonderful Firebox right now my good people!