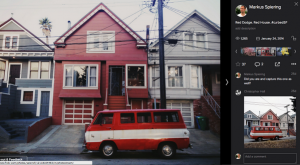 Fickr has now released an improved commenting system to its photo-based social network.

Users can now insert photos into the comment field on Flickr allowing for better stories, comparison shots and so on.

The news first came by way of Markus Spiering, Flickr’s head of product, tweeting about it:

Today we added photos in comments to our new photo experience! Happy commenting and storytelling.

Inserting a photo into a comment works exactly like how you’d expect on a social network – if you’ve ever performed this act on Facebook and Google+ then you’ll feel right at home.

Simply copy and paste the URL of the file you wish to insert into the comments, and the post your comment. As if by magic, it will appear. All comments can be edited and deleted at any time.

The addition of Flickr photo comments comes just a week after the social network marked its 10 year anniversary.