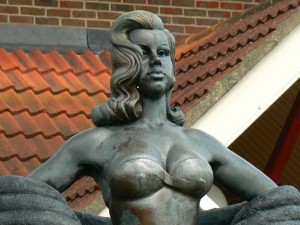 The Wiltshire town of Swindon has another claim to fame – other than being the birthplace of Diana Dors (hence the photo).

Swindon is also now to be crowned as the UK’s first Wi-Fi town – this means offering ‘free’ public Wi-Fi to all 186,000 residents.

By April 2010 the Wi-Fi “Signal” service will be in place and residents wont have to pay a penny for line rental or connection.

The deal is that peeping at low-bandwidth sites is free but users will be able to pay for a 20Mb upgrade. This fee would be “significantly less” than current broadband suppliers, scheme bosses estimate.

Downloading music files or streaming TV shows from iPlayer will inevitably cost extra, which will go some way to paying for the Â£1 million network which will be run by Digital City UK Ltd, in which Swindon Borough Council has a 35% share.

Over 1,400 Wi-Fi hot-spots will be erected, with work beginning in early December with the “Wi-Fi mesh” being completed by April next year.

Primarily aimed at residents, the Wi-Fi will also be available to visitors, albeit at a pay as you go price.