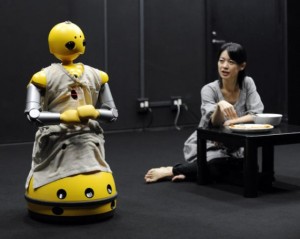 Wakamaru is soon to become household name rather than a household servant.

The domestic droid designed and built by Mitsubishi Heavy Industry stands 3 feet tall, and weighs about 30kg. It was released in 2005 and costs around Â£9,000.Â  It can greet guests and provide information like weather forecasts but soon will be rolling the boards.

Tuesday marked the theatrical debut for the bot, which appeared onstage alongside really-real actors in a play that’s being billed as the first robot-human artistic collaboration.

Hataraku Watashi (“I, Worker”), by playwright Oriza Hirata, focuses on a couple who own two housekeeping robots, one of which loses its motivation to work.

The 20 minute production took place at Japan’s Osaka University (c’mon – where else?) where Hirata is also a visiting professor at the Centre of the Study of Communication-Design.

The performance was played in front of the media ahead of a possible full-scale public run in the next year or so.

Hirata and the rest of the project team wrote special software that lets the robots move and deliver the right lines.

The robot is primarily meant as a companion for seniors and the disabled.Â Using a combo ofÂ a laser and cameras it’s ableÂ to track and identify people, and recognises approximately 10,000 words necessary for daily life and now possibly an acting career.