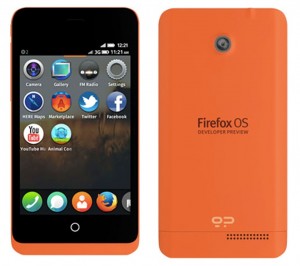 GadgetyNews has previously reported the plans of Firefox to drop its very own OS and now it has two smartphones – the Keon and Peak.

The incredibly orange smartphones from Mozilla are restricted to developers for tinkering with the new Firefox OS for the time being but don’t be put off by its citrusy hue, they’re also available in white.

There’s not a great deal to make the avid smartphone fan swoon at the moment as these versions of the Firefox phone are aimed at developers.

The Keon sports a 1GHz Snapdragon S1 processor, 3.5in HVGA touchscreen, Wi-Fi and 3MP camera which is entry level really.

The top level one, called Peak, packs a 1.2Ghz S4 processor, 4.3in qHD display, and an 8MP snapper which is a little more like it.

Both the Keon and Peak are carrier unlocked and work with OTA updates – making them perfect for devs looking to get their claws into the Firefox OS.

Expect pricing to be announced soon for a release next month.