Firefly gloPhone and flyPhone – Mobiles for Kids Come to UK 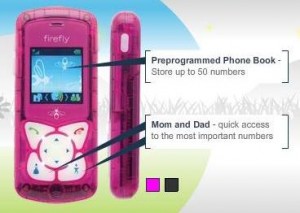 American company Firefly has plans to sell a mobile phone aimed specifically at kids in the UK by the end of the year.

Apparently more than half of under 10 year olds in the UK already own a moblower anyway, which means that Firefly will be entering an already competitive marketplace.

The gloPhone (pinkish) handset has five buttons, two of which to call mum and dad (or mums 1 & 2 or dads 1 & 2 or Gran and Granddad, or any politically correct combination you can think of).

The flyPhone (blueish) features a ‘morphing keyboard’ that changes depending on what functions the kids are after.

A mind-boggling 7,000 of the phones have been sold in Ireland at a cost of Â£85 each. They are available as SIM-free models although the company buddied-up with O2 in Ireland and has been backed by a marketing campaign.