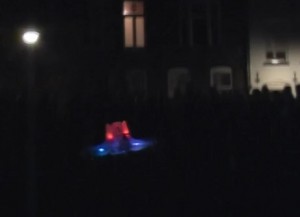 If you want to avoid getting caught for pirating then your network has to be ninja stealthy. If your network literally moves around then that’s got to help. How about drones with wireless internet links?

Electronic Countermeasures, a project from Tomorrow’s Thoughts Today, a London thinktank has done just that.

Electronic Countermeasures has created an “aerial napster” which uses autonomic swarm formation to create, disperse, and reform high-throughput temporary networks in the sky.

How cool is that?

In fact Liam Young, co-founder of Tomorrow’s Thoughts Today, was amazed to read that The Pirate Bay was planning to do something similar.

“I thought hold on, we are already doing that,” Young told TorrentFreak in an interview yesterday.

Even though they started with the intention of creating something akin to an ‘aerial Napster’ or ‘airborne Pirate Bay’ it ended up being more than that.

“Part nomadic infrastructure and part robotic swarm, we have rebuilt and programmed the drones to broadcast their own local Wi-Fi network as a form of aerial Napster. They swarm into formation, broadcasting their pirate network, and then disperse, escaping detection, only to reform elsewhere,” says the group describing their creation

The public can upload files, photos and share data with one another as the drones float above the significant public spaces of the city. The swarm becomes a pirate broadcast network, a mobile infrastructure that passers-by can interact with.

It is a site specific file sharing hub, a temporary, emergent online community where content and information is exchanged across the drone network. When on location, a visitor can log onto the drone network with their phones and laptops. When the audience interacts with the drones they glow with vibrant colours, they break formation, they are called over and their flight pattern becomes more dramatic and expressive.

It’s visually as beautiful as the idea of forming impromptu communities around the glowing aerial flock.

Watch the vid if you don’t believe me 🙂