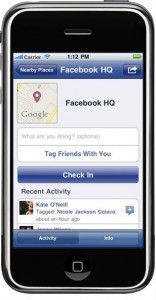 If you access Facebook via the iPhone app you are one of over 100 million active users that are doing the same.

This means that practically every owner of an iOS device (Steve Jobs has said that sales of the iPhone, iPad and iPod touch had topped the 100 million mark back in June) is updating their status and posting random photos onto the social networking site

If that’s still hard to get your head around – it also means that every fifth person on Facebook owns an Apple touchscreen device!

If you are a UK-based iPhone, Touch, iPad user and are wanting to try out Facebook Places there is a way.

Ok – so you can’t have a go on your Appley hand-held but you can test it out on your puter.

Install the free Hotspot Shield and then head to touch.facebook.com.

It should run on most browsers just fine but apparently Safari on Mac is being a bit difficult.

Let me know if you’ve had a play and if you reckon that FourSquare should feel threatened by Places.