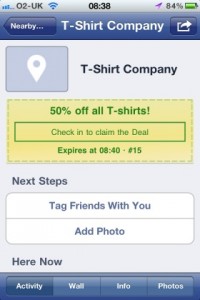 We all like a good deal – especially as money is still in short supply.

As almost everyone is on Facebook these days then Facebook Deals should prove to be very popular.

When you use Facebook Places to check into a store or venue you could be handed vouchers and coupons direct to your Android or Apple smart phone.

All you have to do is open up Places on your phone to see the usual list of locations in your immediate vicinity – deals will be represented by a Post-It Note styled â€˜Golden Ticketâ€™ with launch deals ranging from a free cup of coffee to a free Xbox 360.

There are different types of voucher codes, including charitable donations, product giveaways or loyalty deals – check in somewhere enough times and you’ll grab a freebie. Kinda like the Foursquare Mayorships and other deals that seem to be rather slow to be taken up in this country.

Partners already signed up to promote their shops with Deals include Yo! Sushi, which is offering complimentary food to the first 1,000 visitors, Mazda is offering a prize draw to win one of five Mazda MX-5 Miyakos for five months free driving, and you can also get 20% off when you buy the car.

O2 is offering 10% off all accessories, and the chance to win an Xbox 360 or PlayStation 3 when you check in at an O2 shop. Argos will donate a quid to the Teenage Cancer Trust for the first 10,000 check-ins at its stores.

Debenhams is offering free mascara to 1,000 people, and possibly the best deal happens if you check in to Alton Towers on 18 February -Â  you get free entry to the park. Hmmmm chances are that will be a very busy and geek-filled day!

Deals launched in the US late last year and will be made available to iPhone and Android touting Facebook users effective immediately in the UK with four other European nations following close behind.

I think we all welcome any way to save cash and get free swag but if Deals is to survive then it’ll need more companies joining in than I’ve seen on Foursquare so far.

What do you think? Do you reckon this is going to take off?

Let me know below and why not say hi on the GadgetyNews Facebook page? 😉