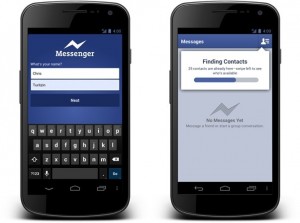 Do you feel like you’re missing out on what folk are chatting about on Facebook Messenger but don’t want to sign up to the ubiquitous social networking site? Soon you’ll be able to chat by just adding your name and number.

If you’re wanting to join in on the chat but don’t want to add all your vital stats and create a Facebook profile then the upcoming Facebook Messenger app for Android might be just what you’ve been waiting for.

An imminent update to the Facebook Messenger app will let anyone sign up using just their name and a phone number; any initial friends will come directly from the newcomer’s own mobile contact list.

The rollout is currently focusing on Australia, India, Indonesia, South Africa and Venezuela, but should spread to the rest of the world in short order.

iOS users are also in line to get the update, although the timetable is less definite.

Facebook is obviously keen to grab those holding out from signing up to the blue-bannered site with the promise of text savings.