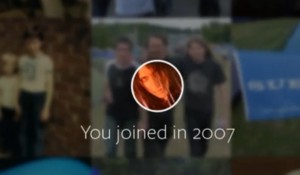 Facebook is celebrating 10 years of being your favourite time-leech and to mark the occasion the company created a special “Look Back” feature. This hands you a nostalgic look over your Facebook history.

The feature consists of a video, tailor made for you and shows such important Facebook milestones as your most-liked posts and photos.

The automated video compiles about 15 of your most liked photos, statuses and life events and slaps on a soundtrack for good measure. I have to admit, it actually did bring some memories back – albeit rather cheesily.

“When I reflect on the last 10 years, one question I ask myself is: why were we the ones to build this? We were just students. We had way fewer resources than big companies. If they had focused on this problem, they could have done it. The only answer I can think of is: we just cared more,”

Nick Kwiatek, lead engineer on the project says Look Back is one of the Facebook’s biggest video projects of all time:

“One of the things that motivated us was that there’s really only a handful of companies that could take on something like this — that could render videos for as many people as we can.”

Simply sign in at facebook.com/lookback and you’ll be met with a video tailored just for you. It’s a shame that it doesn’t look like it can be shared or Liked, which is odd given it’s Facebook…

A “Share Your Movie” button has since appeared on the top right of the page, letting you post your look back video on your timeline with the default message “Here’s my Facebook movie. Find yours at https://facebook.com/lookback/ #FacebookIs10”.