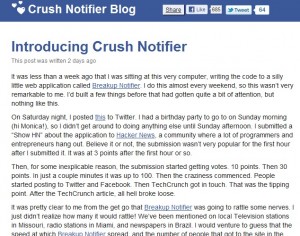 First there was the Facebook Breakup Notifier which would ping you an email when one of your ‘friends’ (someone you were stalking) ended their current relationship – the app didn’t last very long before it got blocked because of a massive spike in usage which saw 3.6 million people sign up for the notifications in just three days! As if we needed any more proof why so many of you are on Facebook 😉

So now the developers have put together another app that will let that certain someone know that somebody has their sights on them romantically. Is that less creepy? HMMmm… not sure :p

The Crush Notifier web app will send the object of your desire an email to let them know that one of their friends is “crushing on them“, but they won’t know who.

I suppose it does sound creepy but less so if you see it as an all year round internet version of a Valentine’s Day card. Yeah – still a bit stalkery aint it? 😉

Now, like a game of love Battleships you can score a hit, or Love Connection, if the crushee sends a crush request to the crusher. This will be the signal for the app to notify the soon to be matched Facebook friends of each other’s interest – violins will play, birds will sing, etc.

Installing the Crush Notifier app will give you two free credits to let people know that you hold a torch for them (how old skool am I?) all anonymous like, but if you’re looking to play the field a bit then you’ll need to stock up on crush tokens through Facebook Credits.

Let’s see how long this one lasts before you hormonal bunch of lust monsters breaks Facebook again!