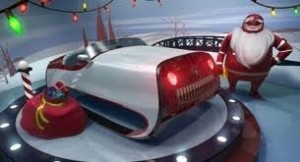 It’s good news all round as an official press release from the Federal Aviation Administration (FAA) safety inspectors at the North Pole states that Santa’s reindeer-powered sleigh has been cleared for its Christmas Eve round-the-world delivery mission.

Santa One, led by Rudolph the Red-Nosed Reindeer, is outfitted with new satellite-based NextGen technology, which will allow Santa to deliver more toys to more children with improved safety and efficiency.

â€œChildren around the world will get their gifts on time, regardless of the weather, thanks to NextGen,â€ said U.S. Transportation Secretary Ray LaHood. â€œWeâ€™re proud to say NextGen is bringing Santa Claus to town.â€

Rudolphâ€™s red nose has been outfitted with avionics that will broadcast Santa Oneâ€™s position via satellites to air traffic controllers around the world with improved accuracy, integrity and reliability.

â€œSantaâ€™s cockpit display will help improve his situational awareness by showing him and his reindeer flight crew their precise location in relation to other aircraft, bad weather and terrain,â€ said FAA Administrator Randy Babbitt.

NextGen technology will allow Santa One to maintain cruising altitude for as long as possible before making a continuous descent into cities and towns around the world. While maneuvering on rooftops, an advanced, onboard runway safety system will help reduce the risk of incursions between the sleigh and chimneys.