EyeStop – The MIT Designed Bus Stop of the Future 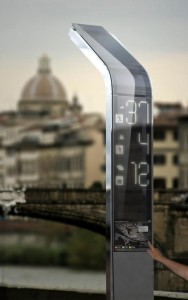 This bus-stop looks so nice I want it to arrive in London – but fear that within an hour it would be ‘tagged’, smashed and stickered 🙁

It was designed by MIT architects and engineers.

The system will let you know when the next bus is due, figure out where you are, and even grab news headlines from out of thin-air.

The stop is â€œcoveredâ€ in touch-sensitive e-ink screens and can sense where you are, where it is (which should, in theory, be the same as where you are shouldn’t it?), and what the surroundings are like.

So, when the driverless bus pulls up (this is the future remember) on time in our Utopian society these points will also provide tourist information and the like.

Failing that – These will become congregation points for our new robot masters to collect their â€œmeat batteries.â€

On one-side I like the idea of being able to check your e-mail, share community information on a digital message board or monitor the local air quality – but most of that is already possible via your mobile phone.

I do, however, love the idea of being able to know the exact location of that bus that youâ€™re waiting for – it’s that extra

MIT architects and engineers just unveiled a design for such a bus stop this past Saturday, at the Genio Fiorentino festival in Florence, Italy. (A more formal prototype will be unveiled this October.)

Called EyeStop and developed by the MIT SENSEable City Lab, it takes the tedium out of waiting for the bus and showcases the potential of next-generation urban transportation design.

The EyeStop is partially covered with touch-sensitive e-INK and screens, and features state-of-the art sensing technologies and a variety of interactive services. Riders can plan a bus trip on an interactive map, surf the Web, monitor their real-time exposure to pollutants and use their mobile devices as an interface with the bus shelter. They can also post ads and community announcements to an electronic bulletin board at the bus stop, enhancing the EyeStopâ€™s functionality as a community gathering space.

EyeStop was developed at the SENSEable City Laboratory by Giovanni de Niederhousern, Shaocong Zhou, Assaf Biderman and Carlo Ratti, in collaboration with the Province of Florence and the local public transportation authority ATAF.