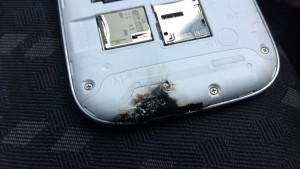 Do you recall the article about a Samsung Galaxy S III which dangerously exploded whilst sat next to its owner as he drove his car? Samsung sent some experts to investigate and the guy in question has since retracted his statement.

Samsung was obviously intrigued by report that one of their flagship phones had decided to explode whilst its owner was busy driving. Not only could this have caused an accident – the thought of it happening to someone with a phone to their ear, in their pocket or even by them as the slept was cause for serious concern.

A Dublin-based student, dilo2k10, wrote that he was “driving along with my Galaxy S3 in my car mount when suddenly a white flame, sparks and a bang came out of the phone.”

The mobile was rendered useless as well as it singeing plastic in his car.

He rightly added: “I’m really annoyed… That could have been the side of my face or through my pocket and my leg, or set fire to my bed.”

Samsung said that they would investigate this incident and enlisted Fire Investigations UK (FIUK) to find out exactly why the Galaxy S III decided to spontaneously combust.

The company’s report states that “The energy source responsible for generating the heat has been determined as external to the device,” and they found that “the device was not responsible for the cause of the fire”. They concluded that “The only way it was possible to produce damage similar to the damage recorded within the owner’s damaged device was to place the devices or component parts within a domestic microwave.”

The owner of the phone was quick to own up after being faced with these facts. “I would like to retract my original statement,” dilo2k10 wrote on the forum. “The damage to the phone was caused by another person, although they were attempting to recover the phone from water this later caused the damage shown on the phone” going to guiltily admitting “It occurred due to a large amount of external energy and there was no fault with the phone. This was not a deliberate act but a stupid mistake.”

Don’t mess around with things kids – and if you publicly blame a large company for something, bear in mind that they may call your bluff 😉