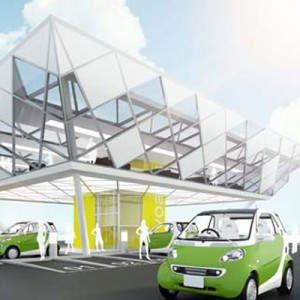 London is getting greener with the help of Evoasis.

Evoasis is planning to bring six new UpStart electric vehicle charging stations to central London by the end of 2009 – with another six following shortly afterwards.

The charging points can almost be mistaken for postboxes and the new ones will be positioned on the sites of disused petrol stations.

The first one will be on Grosvenor Road in Pimlico, and will feature twelve charging bays.

These new sites will join the 60 charge points already in central London.

Apparently Evoasis is chatting with Tesco to see if they can drop a few stations in their car parks.

Topping up the battery of your electric vehicle will cost Â£2 and take around 20 minutes.

Screens on the charging posts will feature ads and youâ€™ll also be able to check your cars nick and apparently download tunes for its MP3 player.