Europe Gets 90% of Mobile Phones Produced to use Standardised Chargers 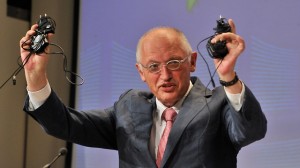 The European Commission has announced that 10 mobile phone producers, which goes to represent some 90 percent of the mobile phone market in the EU, have signed an agreement to use standardised chargers for mobile phones using a micro-USB connector.

European Commission Vice-President GÃ¼nter Verheugen said  that the mobile phone market in Europe alone is responsible for thousands of tons of waste each year as phones are upgraded and old ones are discarded on a short life cycle.

“In the European Union market alone, there are about 185 million new mobile phones a year,” Verheugen said. “We’re talking about a very short life cycle. Worse than that, if you’ve got different phones, it’s always a problem of making sure you’ve got the right charger.”

The new standard should go into effect by the middle of next year, with new phones being provided with a charger that conforms to the standard. Eventually, phones are expected to be offered without a charger, ultimately reducing waste and hassle for the end user.

The standard will use USB for charging, and use a micro-USB connector on the phone itself, so ideally any charger could be used with any phone. “On principle, you would never have to buy a new charger again,” Verheugen remarked.

The proposed standard only applies to “data-enabled” mobile phones – but let’s face it, even ‘basic phones’ are becoming smarter.

So far, the 10 companies that have signed the “Memorandum of Understanding” submitted to the EC includes Apple, LG, Motorola, NEC, Nokia, Qualcomm, Research in Motion, Samsung, Sony Ericsson, and Texas Instruments.

The agreement is like the one adopted by the GSM association earlier this year, which calls for USB charging and standardising on a micro-USB port on the device, and also coincides with a Chinese standard that all new mobile phones must use USB for charging.

“We are optimistic that this standard could be adopted in other geographies,” said Bridget Cosgrave, director of DigitalEurope, a trade group that represents consumer electronics companies.

Ah – the end of those work emails that start: “Does anyone have a charger for a ……” 🙂