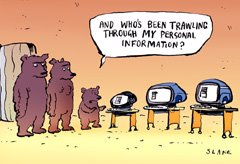 Can you smell that?

A new EU directive means that from today all Internet service providers are requiredÂ to keep data on your user habits and usage.

It states that all ISPs in the Union haveÂ to, by law,Â keep records for a year of online communications.

Thankfully,Â your emailsÂ and Internet phone calls will not be stored, as the directive is designed to establish only “whether there has been contact between suspects”. This data is protected by the Regulation of Investigatory Powers Act 2000.

A warrant will be required to see the data on connections, but civil liberty campaigners are still concerned that the information will be accessible to other public bodies and local authorities other than the police – probably for a small charge 😉

This legislation is a lead-up to the proposed centralised government database which the government reportedly plans to use this kind of information for pre-emptive searches “for suspicious patterns to identify suspects”.

The BBC reports that some governments can see where this is going and actually stood up to the directive.

Germany has mounted a legal challenge and Sweden is going one better by simply ignoring it. Cool huh?

Our beloved government, however, has grabbed its ankles and agreed to reimburse ISPs the cost to them for storing this info.

Not only are we being spied on even more now – we’re also going to be chipping in Â£46 million for the privilege over the next eight years.

So? Does this make you feel all warm and fuzzy knowing that we’re being so “well protected” or would rather carry on your private business – and it be private?

That is if you don’t mind having it stored on a government database :0