Etch-A-Sketch Freestyle – Fun Without The Challenge of Curves 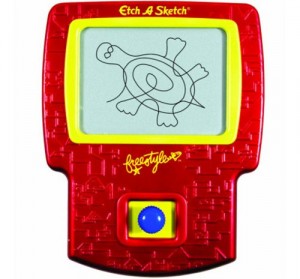 Were you one of those that sat for hours and painstakingly worked on drawing curved lines with your Etch-A-Sketch?

Just to prove that the kids these days get everything waaaaaaaaaaaaaay too easy there’s a new Etch-A-Sketch on the block and it goes by the trendy name – Freestyle.

Yup, this fresh, new version of the classic has taken any remote challenge out of making a decent picture on the graphic toy.

Remember using the two dials that controlled the AB and XY axis in order to guide the drawing tool around? You see I don’t. I never had one. I just used to watch the other children laughing with glee as they brandished their bright red toys…………..

Well, on this so called ‘Freestyle’ version they’ve managed to simplify it for the little angels.

Instead of having a pair of knobs to twiddle this funky version has a single trackball style effort that swivels around in a show-offish 360 degrees.

This new-age curvy nonsense can be won in exchange for $14.99 so ideal for Christmas Secret Santa‘s or if you want to spoil your children.