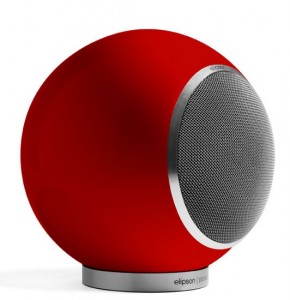 You may have already gathered that GadgetyNews loves stylish design and outstanding audio. Well, Elipson has just announced that their Planet L loudspeakers are now available in the UK – just in time for Christmas!

The French audiophiles over at Elipson have been “registering design patents and developing new acoustic technologies” over the last 70 years. Apparently the company took its name after developing a loudspeaker made up of a sphere and an ellipsoidal reflector.

Since then Elipson have found their speakers in French recording studios and concert halls as well as in the homes of the more discerning European audio fans.

The Planet L speakers spent 2 years in research and development and combine high-end audio with classy looks based on those first spherical ear-pleasers.

Elipson’s Planet L’s are thoroughly up-to-date and feature a bass reflex enclosure made from an inert glass-fibre resin compound which is then finished in a choice of three piano gloss colours: red, white and black.

For the audio tech-heads out there – The specification boasts a powerful 2-way, 165mm coaxial driver with an integral 25mm soft dome tweeter.

You can pretty much put these speakers (H423 x W405 x D428mm and weigh 8.5kg ) anywhere thanks to the 4 clever mounting accessory options. The Planet L’s can be used for table, floor, wall and ceiling applications and can be purchased as a stereo pair for music or individually for multi-channel or commercial applications.

The Planet L loudspeakers are available from authorised UK retailers from 1st December at an SRP of £599 per pair and are the first products of the company’s ambitious roadmap including active wireless audio systems all with unique and iconic lifestyle designs.

John Lewis has them at £299 per speaker or £1799 for a pair of speakers with the Elipson Music Centre.