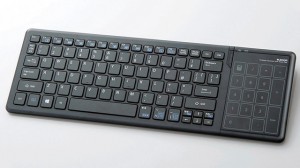 Having Windows 8 and all its clever gesture shortcuts is all very well, if you are running it on a tablet or have a touchscreen display. If, like me, you already upgraded to a snazzy non-touchscreen monitor then how do you get hands-on without buying another monitor?

Well, Elecom has just announced a new full-sized wireless keyboard that is equipped with a dedicated number pad which doubles up as a gesture-compatible touchpad.

The Elecom TK-FDP055BK will land next month at a cost of £65 and has employed its number pad for double shifts.

As well as the numpads general digit punching job it can be brought in to touchy action at the push of a button and then can be used like a laptop’s trackpad for controlling the cursor and performing more common gestures like scrolling.