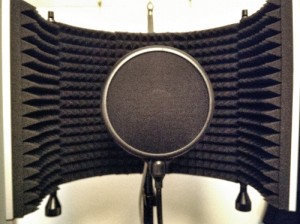 Recording music when you live in a tiny London flat presents a range of challenges. As well as the lack of space, recording vocals in particular can be tricky. Would the Portable Vocal Booth Pro 2 from Editors Keys make a difference?

Vocal booths eliminate and absorb echo, dampen outside noise and ensure that you get a clear recording of the voice through the microphone. Needless to say, I don’t have the room to build a dedicated booth (although I did consider utilising a wardrobe) for recording vocals. It also occurred to me that, should my plans to record podcasts ever materialise, it would be handy if I could record sat at my desk as well as being stood.

The Vocal Booth Pro 2 from Editors Keys was released a couple weeks ago and I was so intrigued by it I just needed to test it out myself. 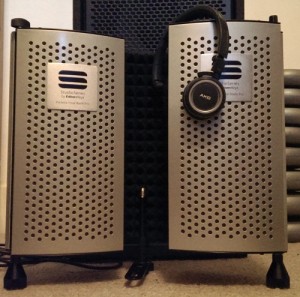 The Portable Vocal Booth Pro from Editors Keys can be used sat on a desk for podcasts and webinars or placed on the bundled stand when recording vocal tracks to music. To attach it to the stand all you have to do is unscrew the central foot and then screw the stand in instead.

The first thing that hit me was the booth’s compact design. It is hinged in two places to give you a triptych that encapsulates the microphone on three sides. This gives easy access for the singer to do their thing as well as allowing you to adjust the area to suit your space.

The folding design of the Pro Booth also lends itself to easy portability and storage when it’s not in use.

The bundled stand from Editors Keys is fully adjustable in height with a safety pin that prevents the thing from slipping should you have failed to tighten the screw enough. The tripod base also provides for multiple height adjustment and stability.

The interior of the hole-punched aluminium backed booth is lined with thick, pyramidal foam which diffuses the acoustic waves surrounding the microphone thus preventing them from bouncing back to the mic. The punched holes in the back of the aluminium Vocal Booth 2 adds an extra layer of sonic deflection.

The booth sides open like barn doors so you can close the sides around the microphone for a better recording environment or so that the booth can fit better on your desk.

A clamp with a fully adjustable microphone mount is attached between the head and the stand/central foot. The mount can be adjusted laterally for horizontal positioning so that the mic can moved closer to or further away from the acoustic head unit for achieving correct placement.

At 6KG it’s light enough to cart around, preferably from venue to car and back, which means you can move it around the room/flat without giving yourself a hernia. 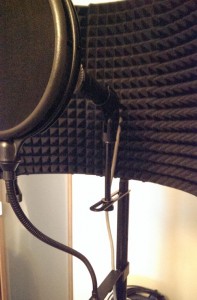 The Vocal Booth sets up in minutes and is easy to use. The clamp attaches to the bottom of the head unit then together they screw onto the included stand. Adjust the stand to the desired height, attach your microphone to the mounting post, adjust for proper microphone placement, alter the sides to achieve your desired sound and you’re ready to go.

I’ve tried some simple recording tests with and without the vocal booth and the major difference I noticed was that the vocal booth easily diffused the echoes in the room, keeping the sound nice, clean and dry.

When I wasn’t using the booth the room acoustics were very present. As well as the constant hum from my PC, I could also just about detect my other-half moving about our flat even though I had the door to the room firmly closed. When the mic was in the booth the recording was not affected by my surroundings and the mic no longer picked up any extraneous noises.

What I also like is that, should someone decide that they need to work in the room you have set up in, you can pick the Vocal Booth up – stand, mic and all – and easily move into another room. 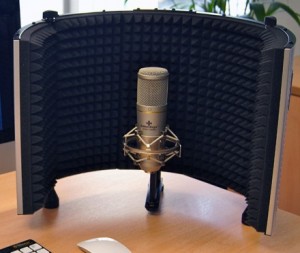 Obviously the portability of this Pro booth is its main selling point and it does this well. The barndoor design means it’s easy to move around and stow away as well as being practical when getting the audio right.

Not only having a stand included in the bundle but an adjustable mic mount means that everything is ready to go, right out of the box. The package I was testing even came with a double-layered pop-shield.

If I was to change anything I would suggest adding a case of some kind, even if it’s just a drawstring bag, to protect the Portable Vocal Booth Pro 2 when being portered.

All-in-all the booth is easy to setup and use, effective and affordable at £169.99. The Portable Vocal Booth Pro 2 by Editors Keys is a sensible solution for musicians, singers and pod/vodcasters the world over who find themselves beset by acoustic anomalies.