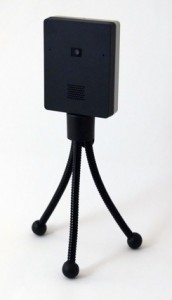 Most of the Mac users that I know like the clean lines and style of the Apple products.

If they are unsatisfied with their built-in webcam they would most likely prefer to replace it with something that will not clutter their workspace.

So, Ecamm Network has come to their rescue and have just announced what it’s claiming to be the world’s first Bluetooth webcam.

You also will get 4 hours chat time before you have to do that loathsome thing of whipping out that USB cable to recharge it.

I hope that Mac users are also flush with cash as the BT-1 Cam requires $150 of your hard-earned when it is released sometime in Spring.

If you’re a Windows user there may be a version out soon after.