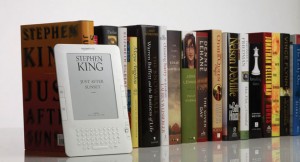 As you’re a Gadgety News reader you’ve probably expected eBooks to overtake ‘real’ books on Santa’s lists for a while but now it has actually happened!

There’s now so much choice if you fancy getting an eBook and, as I’ve mentioned before, the fact that you can have a library in your bag without doing yourself a mischief has taken the e-Ink readers far beyond being a novelty purchase into a genuine, forest-saving alternative.

Amazon.com has announced that more people bought Kindle books than physical ones on Christmas day and so making it the “most gifted item in Amazon’s history”.

Amazon also claimed the Kindle was one of its highest selling electronics items alongside the iPod.

Jeff Bezos, CEO of Amazon.com, stated that “We are grateful to our customers for making Kindle the most gifted item ever in our history,”

Did you get a Kindle or any other reader for crimbo?