Dre Proves it’s all about the Benjamins in Monster Beef 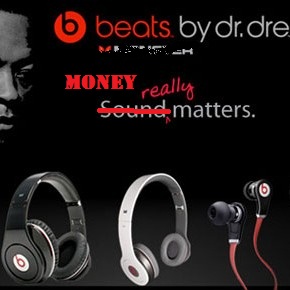 Beats by Dr Dre and Monster must be one of the most prevalently visible partnerships on my daily commute. Not any more now that Dre, or Andre to his family, has pulled the chord on their marriage.

Beats by Dre is the range of bass-heavy audio tech headed by rapper-businessman Dr Dre but built by Monster.

The partnership has obviously paid dividends looking at the amount of earwear with red cable hanging from them and so, in true gangsta-style, there appears to be ego at work as Dre and Monster will be going their own ways at the end of the year due to a dispute over money and credit for the partnership’s undisputed success.

It has only taken a couple of years for Beats and Monster to have gobbled up more than half of the headphone market with their range ear-pleasers.

The top-end cans seem to be worn as a source of basstastic beats being piped into your brain and as a fashion accessory in equal measure. Just check the gallery of celeb endorsements which includes everyone from Lara Croft to crew-members of the USS Enterprise.

Not only that but collaborations with David Guetta, Justin Bieber and others helped bring the brand to an ever increasing fan-base eager to buy-in to the style.

If imitation is the sincerest form of flattery then 50 Cent and Ludacris have done their utmost to show that Dr Dre and Monster discovered a winning formula. You are not a great rapper until you wear too much jewelry, have a garishly customised ride and your own range of expensive headphones.

Beats audio tech started to slip into HP Envy laptops and since it’s part-owned by HTC you can even get a mobile phones such as the HTC Sensation XE and HTC Sensation XL pumping that bass.

I am certain that the Beats will go on thanks to it’s urban swagger as long as they’re still well built. Monster still have some natty cans and inner-ear pleasers at top dollar, not to mention working with Nokia and the Tron/Daft Punk cans, so I am sure they’ll be fine.